Hydrocyclones do not have moving parts, require a low installation and maintenance investment and are simple to operate. Hence, these devices are widely utilized in mineral, chemical, petrochemical, textile and metallurgical industries.

The hydrocyclone is a closed vessel designed to convert incoming liquid velocity into rotary motion. It does this by directing inflow tangentially near the top of a vertical cylinder. This spins the entire contents of the cylinder, creating centrifugal force in the liquid. Heavy components move outward toward the wall of the cylinder where they agglomerate and spiral down the wall to the outlet at the bottom of the vessel. 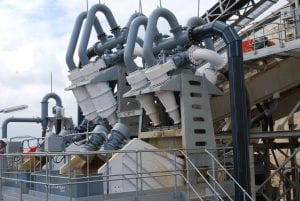 Light components move toward the axis of the hydrocyclone where they move up toward the outlet at the top of the vessel. The hydrocyclone separates solid and liquid or liquid and liquid by the difference in density between the fluid and the material to be separated in this equipment. The spiralling motion of the fluid caused by the tangent feeding, the material of larger density is thrown against the wall of the hydrocyclone and dragged to the underflow while the one of smaller density proceeds for the overflow, forming a free vortex (outer vortex) and a forced vortex (inner vortex).

Another key difference between hydrocyclones and centrifuges is cost. Centrifuges are expensive precision rotating machines that often need sophisticated control, whereas hydrocyclones have no moving parts and have virtually no controls at all.

Hydrocyclones and centrifuges are complementary rather than competing devices. If gravity alone will settle a significant portion of your solids in a minute or two using a quick bottle test, you should investigate hydrocyclone separation. If settling takes much longer than this, then you may need a centrifuge or other separation method

In some applications, hydrocyclones capable of sharp separations of heavy particles & light particles are required. In other situations, they are used for incremental enrichment, reducing the load on other, more costly separation equipment and improving the overall economics of operation.

Hydrocyclones are generally not recommended for removing long fibres from liquids.

Generally two valves are installed on the hydrocyclone – one valve on the upflow outlet and the other on the downflow outlet in Pilot trials when settling characteristics are not known fully. This allows adjustment of the two flows during the trial. Once the optimum flow split is determined, valves can be substituted by orifices in routine service. Fixed orifices ensure that flow conditions do not change easily.