In industry, there are so many diversified and extensive drying systems. For each and every product, there is a representative curve that describes the drying characteristics for that product at a specific temperature, velocity and pressure conditions. This curve is referred to as the drying curve for a specific product. Figure below shows a typical drying curve. Variations in the curve will occur principally in rate relative to carrier velocity and temperature. The principles of drying may be applied to any type of dryer, but it should help the understanding of these principles if a few common types of dryer systems are described in detail. 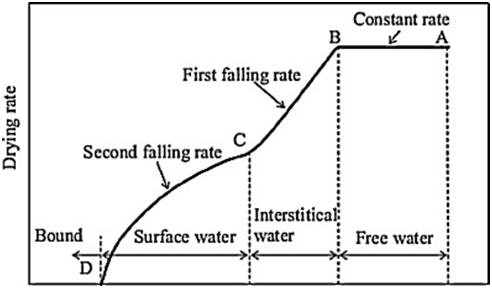 Major dryer systems are described below & schematic drawings of peculiar dryers are given below.

In tray dryers, the material is spread out, generally quite thinly, on trays in which the drying takes place. Heating may be by an air current sweeping across the trays, by conduction from heated trays or heated shelves on which the trays lie, or by radiation from heated surfaces. Most tray dryers are heated by air, which also removes the moist vapors.

These may be regarded as developments of the tray dryer, in which the trays on trolleys move through a tunnel where the heat is applied and the vapors removed. In most cases, air is used in tunnel drying and the material can move through the dryer either parallel or counter to the air flow. Sometimes the dryers are compartmented, and cross-flow may also be used.

In these the material to be dried is spread over the surface of a heated drum. The drum rotates, with the material being applied to the drum at one part of the cycle. The material remains on the drum surface for the greater part of the rotation, during which time the drying takes place, and is then scraped off. Drum drying may be regarded as conduction drying. 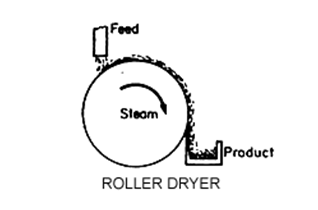 In a fluidized bed dryer, the material to be dried is maintained suspended against gravity in an upward-flowing air stream. There may also be a horizontal air flow helping to convey it through the dryer. Heat is transferred from the air to the material, mostly by convection.

In a spray dryer, liquid or fine solid material in a slurry is sprayed in the form of a fine droplet dispersion into a current of heated air. Air and solids may move in parallel or counter flow. Drying occurs very rapidly, so that this process is very useful for materials that are damaged by exposure to heat for any appreciable length of time. The dryer body is large so that the particles can settle, as they dry, without touching the walls on which they might otherwise stick. Commercial dryers can be very large of the order of 10 m diameter and 20 m high. 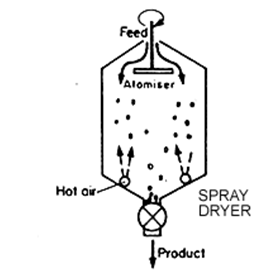 In a pneumatic dryer, the solid particles are conveyed rapidly in an air stream, the velocity and turbulence of the stream maintaining the particles in suspension. Heated air accomplishes the drying and often some form of classifying device is included in the equipment. In the classifier, the dried material is separated, the dry material passes out as product and the moist remainder is recirculated for further drying.

The material to be dried is contained in a horizontal inclined cylinder through which it travels, being heated either by air flow through the cylinder, or by conduction of heat from the cylinder walls. In some cases, the cylinder rotates and in others the cylinder is stationary and a paddle or screw rotates within the cylinder conveying the material through. 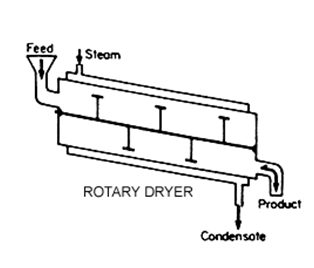 The materials to be dried are contained in a trough-shaped conveyor belt, made from mesh, and air is blown through the bed of material. The movement of the conveyor continually turns over the material, exposing fresh surfaces to the hot air.

In bin dryers, the material to be dried is contained in a bin with a perforated bottom through which warm air is blown vertically upwards, passing through the material and so drying it.

The material to be dried is spread as a thin layer on a horizontal mesh or solid belt and air passes through or over the material. In most cases, the belt is moving, though in some designs the belt is stationary and the material is transported by scrapers.

Batch vacuum dryers are substantially the same as tray dryers, except that they operate under a vacuum, and heat transfer is largely by conduction or by radiation. The trays are enclosed in a large cabinet, which is evacuated. The water vapor produced is generally condensed, so that the vacuum pumps have only to deal with non-condensible gases. Another type consists of an evacuated chamber containing a roller dryer.

The material is held on shelves or belts in a chamber that is under high vacuum. In most cases, the material is frozen before being loaded into the dryer. Heat is transferred to the food by conduction or radiation and the vapor is removed by a vacuum pump and then condensed. In one process, given the name accelerated freeze drying, heat transfer is by conduction; sheets of expanded metal are inserted between the material and heated plates to improve heat transfer to the uneven surfaces, and moisture removal. The pieces of material are shaped so as to present the largest possible flat surface to the expanded metal and the plates to obtain good heat transfer. A refrigerated condenser may be used to condense the water vapor.