A hydrocyclone will normally have a cylindrical section at the top where liquid is being fed tangentially, and a conical base. The angle, and hence length of the conical section, plays a role in determining operating characteristics. 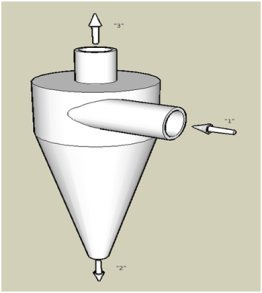 A hydrocyclone has two exits on the axis: the smaller on the bottom (underflow or reject) and a larger at the top (overflow or accept). The underflow is generally the denser or coarser fraction, while the overflow is the lighter or finer fraction.

Internally, centrifugal force is countered by the resistance of the liquid, with the effect that larger or denser particles are transported to the wall for eventual exit at the reject side with a limited amount of liquid, while the finer, or less dense particles, remain in the liquid and exit at the overflow side through a tube extending slightly into the body of the cyclone at the centre.

Hydrocyclones can be made of metal (mostly steel), ceramic or plastic (such as polyurethane, polypropylene, or other types). Metal or ceramic hydrocyclones are used for situations requiring more strength, or durability in terms of heat or pressure. When there is an occurrence of much abrasion (such as occurs with sand particles) polyurethane performs better than metals or ceramics. Metal lined with polyurethane is used in cases of combined abrasion and high pressure.

In a suspension of particles with the same density, a relatively sharp cut can be made. The size at which the particles separate is a function of cyclone diameter, exit dimensions, feed pressure and the relative characteristics of the particles and the liquid. Efficiency of separation is a function of the solids’ concentration: the higher the concentration, the lower the efficiency of separation. There is also a significant difference in suspension density between the base exit (fines) and the apex exit, where there is little liquid flow.

If the size range of the particles is limited, but there are differences in density between types of particles, the denser particles will exit preferentially at the apex. The device is therefore a means of selective concentration of, for example, minerals. This device is also related to the centrifuge; both of them are intended to separate heavies and lights in liquid by application of centrifugal force.

For a Bradley Hydrocyclone the dimensions of each part are always in the same proportions. The pressure drop should be between 20 psi and 60 psi.

Di is the inlet diameter

Do is the overflow diameter

Du is the underflow diameter

Dc is the chamber diameter

L is the height of the hydrocyclone

Le is the length of the outlet tube

Theta is the angle at the base of the hydrocyclone
Di/Dc = 0.244

The separation efficiency of a hydrocyclone under a particular set of running conditions can be described in terms of the “heavies” concentration in the “lights” outflow as a percentage of the “heavies” loading in the total inflow.

Volumetric percentage separation calculations (%v/v) are usually quicker and easier to perform. However, the separation efficiency calculation can also be performed on a mass basis (%w/w).

In some applications, hydrocyclones are capable of sharp separations of “heavies” and “lights”. In other situations, they are used for incremental enrichment, reducing the load on other, more costly separation equipment and improving the overall economics of operation.

Hydrocyclones are generally not recommended for removing long fibers from liquids.

Learn more about resources that can aid in water treatment.