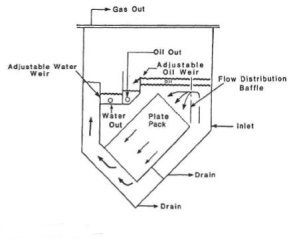 API and CPI (Corrugated Plate Interceptor) separators are predominantly used in the separation of free oil from produced or effluent water or suspended solids for oily water treatment in an (Oily Water System) (OWS). The basic principle of difference in gravity between the phases (liquid-liquid or solid-liquid) is employed in an OWS in the separation of the two phases. This phenomenon is defined as “Gravity Separation.”

It is clear that the phase with high density will settle and with lower density will float to the surface of fluid. In an OWS, the effectiveness of this technique is subjected to various factors such as density difference, the viscosity of the oil, factors of the medium, temperature, turbulence, and also the nature of impurity etc.In some cases chemical coagulation and flocculation is needed for removal of the impurities by making them heavier. In separation technique while considering the above-referred factors, which affects the separation of impurities, an overflow rate (m3/m2/day) or settling velocity (m/hr) is arrived at. This factor determines the surface area required for the gravity separation in an OWS. Incidentally, it also underlines the point that gravity separation is independent of the depth of basin. But while saying so, one must keep in mind that quiescent conditions are required for good settling.

In order to reduce the frictional resistance between the separated material and the corrugated plates to a minimum, particular attention needs to be paid to the smoothness and hardness of the plate surface. The Corrugated Plates as well as the casing of the Plate Pack of TPI/ CPI separator are generally made from glass fiber reinforced polyester resin. This material is resistant to the most frequently used chemical additives and temperature as well as effluents to be treated.