Description of the Design and Operation : The API oil-water separator is a gravity separation device designed by using Stokes Law to define the rise velocity of oil droplets based on their density and size. The design of the API oil-water separator is based on the specific gravity difference between the oil and the wastewater because that difference is much smaller than the specific gravity difference between the suspended solids and water. Based on that design criterion, most of the suspended solids will settle to the bottom of the separator as a sediment layer, the oil will rise to top of the separator, and the wastewater will be the middle layer between the oil on top and the solids on the bottom.

Typically, the oil layer is skimmed off and subsequently re-processed or disposed of, and the bottom sediment layer is removed by a chain and flight scraper (or similar device) and a sludge pump. The water layer is sent to further treatment consisting usually of a dissolved air flotation (DAF) unit for further removal of any residual oil and then to some type of biological treatment unit for removal of undesirable dissolved chemical compounds. 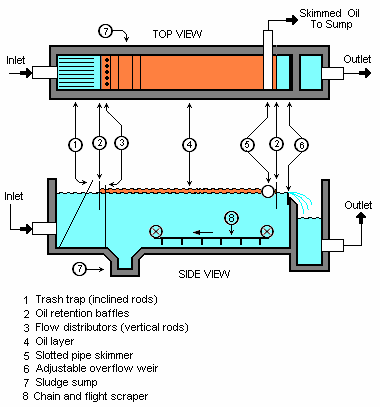 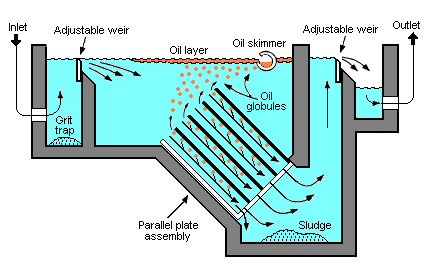