These “hardness ions” cause three major kinds of undesired effects. Most visibly, metal ions react with soaps and calcium-sensitivedetergents, hindering their ability to lather and forming a precipitate—the familiar “bathtub ring”. Presence of “hardness ions” also inhibits the cleaning effect of detergent formulations. Second, calcium and magnesium carbonates tend to precipitate out as hard deposits to the surfaces of pipes and heat exchanger surfaces. This is principally caused by thermal decomposition of bi-carbonate ions but also happens to some extent even in the absence of such ions. The resulting build-up of scale can restrict water flow in pipes. In boilers, the deposits act as an insulation that impairs the flow of heat into water, reducing the heating efficiency and allowing the metal boiler components to overheat. In a pressurized system, this can lead to failure of the boiler. Third, the presence of ions in anelectrolyte, in this case, hard water, can also lead to galvanic corrosion, in which one metal will preferentially corrode when in contact with another type of metal, when both are in contact with an electrolyte. However the sodium (or Potassium) ions released during conventional water softening are much more electrolytically active than the Calcium or Magnesium ions that they replace and galvanic corrosion would be expected to be substantially increased by water softening and not decreased. Similarly if any lead plumbing is in use, softened water is likely to be substantially more plumbo-solvent than hard water. 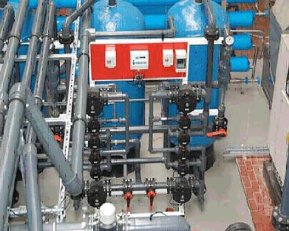 Ion-exchange resins:
Conventional water-softening devices uses an ion-exchange resin in which “hardness” ions trade places with sodium ions that are electrostatically bound to the anionic functional groups of the polymeric resin. A class of minerals called zeolites also exhibits ion-exchange properties; these minerals were widely used in earlier water softeners. Water softeners may be desirable when the source of water is a well, whether municipal or private.

As these resins become loaded with undesirable cations and anions they gradually lose their effectiveness and must be regenerated. If a cationic resin is used (to remove Calcium and Magnesium ions) then regeneration is usually effected by passing concentrated brine, usually of sodium chloride or potassium chloride, or hydrochloric acid solution through them. For anionic resins a solution of sodium or potassium hydroxide (Lye) is used. Most of the salts used for regeneration gets flushed out of the system and may be released into the soil or sewer. These processes can be damaging to the environment, especially in arid regions. Some jurisdictions prohibit such release and require users to dispose of the spent brine at an approved site or to use a commercial service company. Most water softener manufacturers provide metered control valves to minimize the frequency of regeneration. It is also possible on most units to adjust the amount of reagent used for each regeneration. Both of these steps are recommended to minimize the impact of water softeners on the environment and conserve on reagent use. Using acid to regenerate lowers the pH of the regeneration waste.

In industrial scale water softening plants, the effluent flow from re-generation process can be very significant. Under certain conditions, such as when the effluent is discharged in admixture with domestic sewage, the calcium and magnesium salts may precipitate out as hardness scale on the inside of the discharge pipe.

If Potassium chloride is used the same exchange process takes place except that potassium is exchanged for the calcium, magnesium and iron instead of sodium. This is a more expensive option and may be unsuited for people that are on potassium-restricted diets.