Ion Exchange packages or Ion exchange Softening is the process of removing Calcium and Magnesium ions from water through cation exchange. This is typically used to reduce scaling tendency of water used for boiler feed, or to increase the lather effect of detergents, particularly in laundries 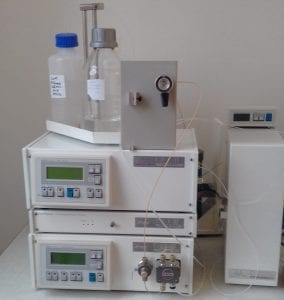 In this process, Calcium and Magnesium ions in solution are exchanged for sodium ions attached to a cationic resin. This resin is composed of R( SO3-) and in its charged form has a Sodium Ion (Na+) attached to it. When water is passed through this resin, the calcium and magnesium ions in the water displace the Sodium Ions, and adsorb onto the resin. Accordingly, the displaced Sodium ions are released into the water, to join with other ions replacing the calcium and magnesium to form new compounds. A typical example is shown as follows:

As can be seen in the stage of the depleted resin, the Calcium has been removed from the water, so it can be used for the necessary application. This, however, leaves the resin impotent for further calcium or magnesium removal, and as such it needs to be regenerated.

During the regeneration process, a highly concentrated saline solution (15-30% NaCl) is used to “wash” the resin. This causes the Ca or Mg which is adsorbed on the resin to be replaced with Na. The Ca and Mg are released, and combine with ions in the water to form other compounds resulting in “Hard Water”. This water is sent to drain, and then the normal service operation commences with the regenerated resin. The regeneration reaction is as follows:

Sizing of Softener is based on three factors; the capacity of the softener (flow rate), feed water hardness, and frequency of regeneration required.