Filtration is the process of removing suspended particles from water; both course as well as colloidal, adsorbing undesired odours, colours etc.

Simple in appearance, filtration is in reality one of the most sophisticated treatment process. The process is not always correlated to precise laws of physics & not fully explainable. 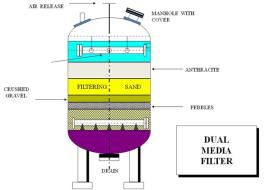 In order to achieve efficient filtration, particles must slow down enough to be held on the surface of a substance. High flows can prevent adsorption due to a lack of surface interaction time. Secondly sufficiently high flow can shear adsorbed particles off the filtering media.

Apart from Particle filtration, filtration process is also used for removal of chlorine.

Activated carbon is a special form of carbon that is produced by heating organic material (such as coconut shells, walnut shells or coal) in the absence of oxygen. The heat removes trapped moisture and gases and pyrolizes most of the organic material; it also leaves the remaining material with a slightly positive surface charge.

An activated carbon bed can remove chlorine, small suspended particles, colloidal particles and dissolved organics due to its ability to adsorb or electrostatically hold particles. These particles would pass between the grains of carbon if not for the weak electrostatic attraction between the positive surface charge of the carbon and the negative surface charge of the particles. Particles can also be trapped in the porous structure of the activated carbon where they are then weakly held. Note that an activated carbon filter is not very efficient at removing most organic compounds from water and is rarely used in this manner.

Sometimes air scour is also employed to facilitate backwashing. The air scrubs against the media, loosening the dirt particles attached to it. The backwash waste water is reduced when Air scouring is employed.

As depicted in pictures above the filters come in two configurations, vertical and Horizontal. Horizontal filters are used when large flows are to be filtered.

Depending upon the application various filter media viz; fine sand, anthracite, garnet or pumice are used.

The filters are widely used in water treatment as below: