Kidney dialysis and water purity are of critical importance for patient health and outcome, and in this regard, there are three major points to consider: 1) Hemodialysis (HD) patients are exposed to more than 400 L of water per week. Contrast this with a person with normal kidney drinking only less than 15 L of water per week. 2) The stomach acid and intestinal barrier protect from the ills of contaminated water more effectively than the barrier imposed by the dialyzer membrane. 3) The functioning kidney can further protect the normal individual from the contaminants of water by eliminating these, this protection being absent for the HD patient.

Thus the regulations governing the purity of drinking water are further modified by the above considerations: exposure of only 10 to 15 L per week and the efficacy of gut and kidney to protect the individual. Whereas the dialysis water is regulated by more strict purity guidelines, failure in observing any of these guidelines has had disastrous consequences. The use of modern more permeable dialyzer membranes has increased the risk of water contamination, and more stringent purity standards must be strictly followed to avoid harm to the patient.

To make water healthier and relatively pure, water authorities often add chemicals such as fluoride, aluminum, chlorine, and chloramines. This makes water unsafe for HD use because these chemicals have been known to accumulate in dialysis patients leading to significant morbidity and mortality. Thus, aluminum in the dialysis water has caused severe aluminum intoxications often leading to death. Similarly, fluoride intoxication has also led to significant clinical catastrophes.

Chemicals leaching from water pipes have also led to chemical intoxications; thus, pipes made of lead, copper, or brass zinc are not suitable for delivering water for dialysis.

The contaminants can be divided into three major categories:

2) Chemicals: These include dissolved inorganic ions and salts such as Na, Cl, Al, Ca, Mg, and Fl.

Organic chemicals include industrial and agricultural toxins such as fertilizers, pesticides, and oils.

3) Microorganisms and endotoxins: These include predominantly bacteria and occasionally fungi, viruses, protozoa, spores, and endotoxins produced by the organisms.

So in order to remove various contaminants different techniques need to be employed. A brief schematic is depicted below to show entire treatment scheme. 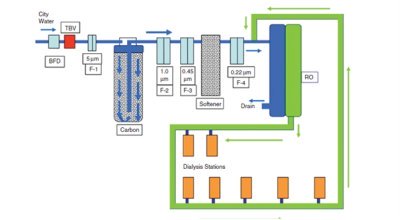 A typical Schematic for water treatment unit for Dialysis Unit

A series of increasingly tighter filters (with smaller pores) are placed in the water line. In Figure, these are shown as F-1 through F-4 with the filter size listed in micrometers. The very first, F-1, is basically to remove large particulate matter from the feed water and often this includes mud with large particles and colloids.

Granules of activated carbon are packed in a cartridge and water is allowed to flow around these granules. The microporous structure of the carbon permits adsorption of organic matter and chlorine and chloramines over its large surface area relative to weight. Activated carbon columns are not effective filters. The carbon columns tend to release ‘‘fines,’’ which are abrasive particles. A series of microfilters (F-2, F-3) are inserted after the carbon column to remove these fines. Often there are two activated carbon tanks in series: the first is called the primary and second the polisher carbon tank (not shown in Figure). Two very important issues related to carbon filters are the exhaustion of the carbon and the growth of microbial organisms. The exhaustion of the adsorptive capacity leads to increased concentrations of chlorine, chloramines, and organic matter in the post-carbon water. To prevent this, the post-carbon water should be monitored for chlorine and chloramines, and its presence in concentrations beyond the acceptable range should trigger the change of carbon filter. The carbon columns are a major source of bacterial and endotoxins contamination because of the porous surface, the presence of organic matter, and the removal of chlorine all favour microbial growth. Monitoring of the carbon filter and periodic flushing with chlorine keeps the microorganism growth under control.

To protect the downstream water treatment device of choice, reverse osmosis (RO) or deionizer (DI), large concentrations of divalent cations must be removed from the water. The high concentrations of Ca and Mg in the city water cause hardness and limit the life of DI or RO devices. Water softeners use Na resin. As water is allowed to pass through the resin, causing the cations in water (Ca, Mg, iron and manganese) to exchange with Na, thus making the product water softer with <1 parts per million (ppm) total hardness.  The softener needs constant monitoring of the quality of softness/hardness and periodic regenerating by brine. The water softener also is a major site for microorganism growth and potential for downstream seeding. To prevent this periodic back-flushing and use of sodium hypochlorite solution is employed.

After the above-discussed pre-treatment devices, the final purification of water is achieved by the use of either RO or mixed-bed DI. Some units use both devices, either in a series, less commonly, or more commonly, a DI as a backup for the reverse osmosis.

RO System: RO is the most cost-effective method for water purification

from both organic and inorganic solutes, including organisms and endotoxins. This is a filtration process of water across a very tight membrane with ionic rejection of

90% to 99%. When water is filtered across this tight membrane, the filtered water is called ‘‘permeate’’ or ‘‘RO water’’ and water containing rejected solutes and

Deionization (DI): This process removes inorganic ions dissolved in the water by an ion-exchange process using cationic and anionic resins. When water is passed through the DI first, the cationic resin exchanges dissolved cations(Na, Ca, Al, Mg, etc.) with H ions. Water containing H ions and very little other cations then percolates around the anionic resin where the dissolved anions are exchanged with OH– ions, and H and OH– ions combine to form pure water, free of all cations and anions.

UV System: UV radiation is an effective way to kill all types of bacteria in all states. Its efficacy, however, depends on the depth of penetration and water flow rates. Germicidal UV lamps are commercially available but have a limited life span.

UV is effective but increases lipopolysaccharides and fragments by bacterial killing. UV alone is not an effective water treatment device and is normally used in conjunction with DI and should be followed by ultrafiltration to remove bacterial fragments.

Quality Monitoring system: A well-planned monitoring program is the only way to

prevent water-related catastrophes in the dialysis unit. The following is a very brief summary of some of the major areas of monitoring. Each unit must develop a well-organized program which is specific for its situation.

Major areas to monitor are:

a. Total hardness in the product water: The total water hardness should not exceed 1 ppm. This should be checked once a day as a minimum, preferably at the end

b. Pressure drop: If pressure drop changes more than 10 PSI between pre-softener and post softener sites, the softener may need back-flushing.

Most units have an automated setup to back-flush periodically.

c. Brine tank salt level: Next to the softener sits a brine tank that regenerates the softener periodically. It is important to make sure that the salt level is maintained

in the brine tank. A timer should be installed that regenerates the tank while unit is not operating.

a. Chlorine and chloramine levels after the last carbon tank, preferably each shift.

b. Pressure drop change of more than 10 PSI leading to back-flush when unit is not operating.

a. Water pressure and flow rates through the unit to ensure optimum efficiency and life of the membrane. A drop in water flow rate may mean that the membrane is

a. Water pressure before and after the unit: a change of more than 10 PSI may mean that tanks may be getting fouled.

5) Filters: All the filters should be regularly monitored for the pressure drop across the device.