Wastewater : water polluted by a mixture of all sorts of inorganic (sand, clay, salts) and organic (proteins, sugars, oils and fats) components;Some of them appear in dissolved form and other in suspended form;

Wastewater Treatment : the process that removes the majority of the contaminants from wastewater or sewage and produces both a liquid effluent suitable for disposal to the natural environment and a sludge.

Biological Wastewater Treatment: Collective name for the processes that eliminate the organic matter using micro-organisms. Nutrients such as N (nitrogen) and P (phosphorus) can also be removed, thereby reducing the eutrophication risk.

Biological treatment is actually the accelerated version of nature’s own way of water cleaning. It produces a clear effluent, harmless for the environment, by removing organic compounds from the wastewater, as well as nutrients such as N and P. From the economical point of view biolo­gical treatment is the most feasible method.AES Arabia Ltd systems are an advanced evolution of the most common biological treatment method, using activated sludge.

Activated sludge: A variable and mixed community of microorganisms in an aerobic aquatic environment. These microorganisms derive energy from organic matter in aerated wastewater for the production of new cells while simultaneously producing energy through the conversion of this organic matter into compounds, such as carbon dioxide (CO2) and water.The activated sludge process consists of a series of consecutive process steps:

There are two methods for establishing these consecutive steps: 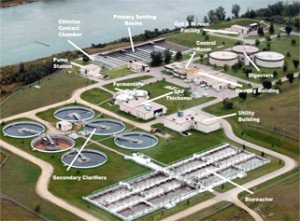 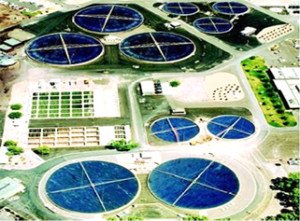