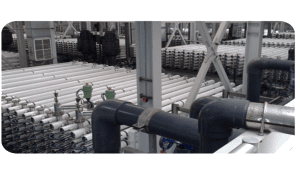 Conserving water has long been a major concern in California. This situation has forced the state to implement emergency water-conservation measures as it struggles to cope with an ongoing drought that has depleted reservoirs and left farms parched. The Orange County Water District (OCWD) has focused on increasing water reuse efforts by building one of the world’s largest wastewater reuse RO plants. During normal operation the district had experienced numerous silica scaling incidents which has resulted in cleaning their membranes with cleaners that contain ammonium bi-fluoride, a hazardous chemical. This was not an acceptable long term solution.

After 2 years of intense R&D work, and 3 years of pilot testing, American Water Chemicals (AWC) has made their first full scale delivery of AWC A-110 antiscalant to the Orange County Water District (OCWD). The district had experienced numerous silica scaling incidents which had forced them to resort to the use of ammonium bifluoride as a membrane cleaner.

Further lab experimentation also determined that variations in iron coagulant carryover had a direct impact on antiscalant demand. A comparison of OCWD feed water and Operational history confirmed a correlation between surges in ferric ion levels and silica scaling events.

The AWC A-110 was developed around OCWD’s complex waste water feed, and was designed specifically for control of high phosphate and silica scales in the presence of ferric ion carryover. OCWD began piloting the AWC A-110 in August 2011 and continued testing through different temperatures and at varying pH levels. By early 2014, it was determined that the AWC A-110 was effectively inhibiting scale in the pilot at a dosage of 3.5 ppm and an operating pH of 6.9. OCWD then made the decision to give AWC the opportunity to provide antiscalant for the full scale 70 MGD GWRS system. The operation at a higher pH level would potentially result in significant operational savings for the district as a result of reduced acid consumption.

“We feel a great sense of accomplishment at AWC because our success was entirely based on years of scientific research that can now be applied to all other membrane water reuse facilities” said Mo Malki, the CEO of AWC. He also emphasized that recent R&D work had shown the product to be extremely effective for controlling aluminum silicate scales. The results of that research were presented more recently in a paper titled “Controlling Aluminum Silicate Scaling in Membrane Separation Processes” at the 2013 IDA World Congress in Tianjin, China.

The OCWD GWRS is in the process of expanding to 100 MGD production capacity.